U.S. launches remain a top priority during the coronavirus pandemic. But that doesn’t mean that launch providers are not feeling its effects. SpaceX and United Launch Alliance are progressing full steam ahead, tackling its respective launch manifests as if everything were status quo. However, SpaceX has begun to feel the effects of the virus. First, its upcoming SAOCOM 1B launch, which was originally slated to liftoff later this month, has been put on indefinite hold. That’s because the payload is an Argentinian satellite, and Argentina has put strict travel restrictions in place until further notice. The delay doesn’t come as much surprise as countries around the world put restrictions on travel to mitigate the effects of the SARS-CoV-2 virus, which causes the COVID-19 disease. This deadly virus has been wreaking havoc across the globe, while overwhelming healthcare systems. But despite being an essential business and needing to stay open, it doesn’t mean that SpaceX is immune. This week, two workers at the company’s headquarters tested positive for the virus. 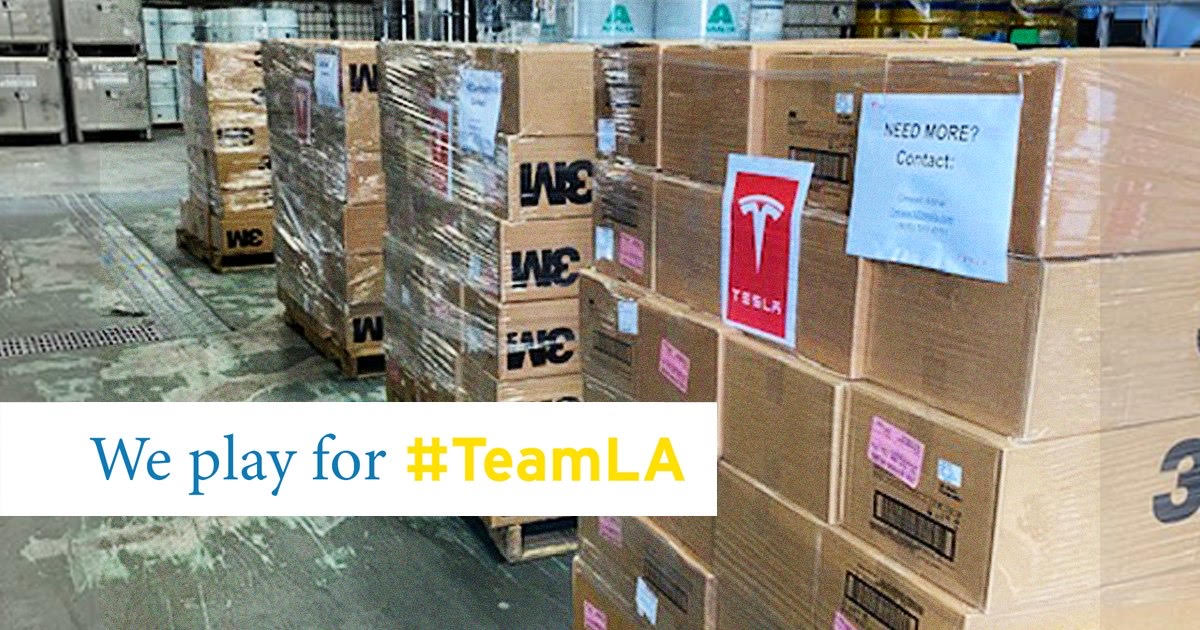 Tesla donates supply of 3M masks to medical facilities to help staff protect themselves against the coronavirus. SpaceX will begin making necessary medical supplies to donate as well. Credit: UCLA (Credit: UCLA) (adsbygoogle = window.adsbygoogle || []).push({}); At least one employee and one health care worker have tested positive, with others who came in contact with these individuals sent home to quarantine themselves for 14 days. The SpaceX employee had recently traveled internationally, and the company is obtaining more thermometers to conduct more employee screenings for the virus. One Medical, which provides health services on-site at SpaceX HQ, reminded its personnel (and anyone else) who exhibit symptoms of the disease to stay home and get tested immediately. The company has also begun to take steps to help its employees better protect themselves. This includes making hand sanitizer and face shields, which the company plans to make in excess in order to donate to local hospitals. Additionally, the company is furnishing more sanitizing options as well as spreading work stations farther apart.

Falcon 9 B1048 is pictured during launch, one frame (~0.05s) before it suffered an engine failure. (SpaceX) As of now, U.S. launches are unaffected, aside from the SAOCOM launch. This is because SpaceX and other launch providers support national security missions, and important infrastructure like GPS, and are therefore deemed essential. So employees are required to report to work unless they are able to telework or are not feeling well. The company had planned on launching two astronauts for NASA as early as May. That targeted date may be in jeopardy after two recent anomalies. SpaceX launched its latest batch of Starlink satellites on March 18, using a veteran Falcon 9 rocket to loft them. The five-time flier experienced an issue with one of its engines during flight. As a result, the booster was unable to successfully land on the drone ship stationed out in the Atlantic. Following the launch, SpaceX announced that it would be investigating the issue to determine what caused it. NASA has since joined in the investigation to ensure that everything is as it should be with the Falcon 9. That anomaly, coupled with the fact that SpaceX’s latest parachute test went awry, means that the upcoming crew mission could be delayed. If it will and by how much are yet to be determined. The post SpaceX quarantines employees after coronavirus confirmed at HQ appeared first on TESLARATI.