Astronomers have begun to gather and analyze detailed observations of a SpaceX Starlink satellite prototype officially labeled DARKSAT and the initial results hint that the satellite constellation should be able to happily coexist with ground-based astronomy in the future. Since SpaceX began launching batches of 60 Starlink satellites in May 2019, the company has raised the ire of parts of the astronomy community and simultaneously awed and inspired many less technical observers with clusters of shooting star-like satellites that are easily visible after launches. While the mid-sized spacecraft do become much dimmer as they raise their orbits from ~300 km (185 mi) to 550 km (340 mi), they are far from invisible even at that operational altitude. It’s safe to say that the current impact on ground-based astronomy is still just shy of negligible even with 360 satellites in orbit, but that impact is assuredly greater than zero and the relatively bright spacecraft have already interrupted telescope observations at many sites around the world. Given that the 360 satellites already in orbit are just a tiny fraction of the ~4400, ~12,000, or even ~40,000 that SpaceX could one day launch, it would be irresponsible to argue that the constellation’s impact – and the impact of others like it – will continue to be minor as the number of satellites grows. Thankfully, while it doesn’t appear that prospective low Earth orbit (LEO) constellation architects anticipated the potential astronomy impact, SpaceX’s Starlink team has rapidly responded and already launched a satellite featuring tweaks designed to dim its appearance from the ground. For several reasons, the initial results from “DARKSAT” are extremely promising – now visible below in some of the first photos offering a useful comparison. Same but with video: 4 @SpaceX Starlink satellites including #Starlink-1030 DARKSAT on 22 March. DARKSAT clearly somewhat fainter. Video camera pointed on fixed alt/az. Frames of 4 video sequences stacked. Brightest stars are Capella and epsilon Aur.@planet4589 pic.twitter.com/aYjIU8JYkF— Dr Marco – Stay At Home! – Langbroek (@Marco_Langbroek) March 24, 2020 (adsbygoogle = window.adsbygoogle || []).push({}); As previously discussed on Teslarati, the first results published on March 18th revealed that Starlink’s DARKSAT prototype – essentially an early, one-off alpha test satellite darkening techniques – is already 55% darker than its fellow untreated spacecraft. While making satellites less reflective makes thermal management a much greater challenge, DARKSAT managed to raise its orbit and begin operations without issue. Launched on January 7th, 2020, a set of 20 spacecraft – representing a single “plane” of the Starlink constellation – all arrived at their operational ~550 km (340 mi) orbits by February 23rd. 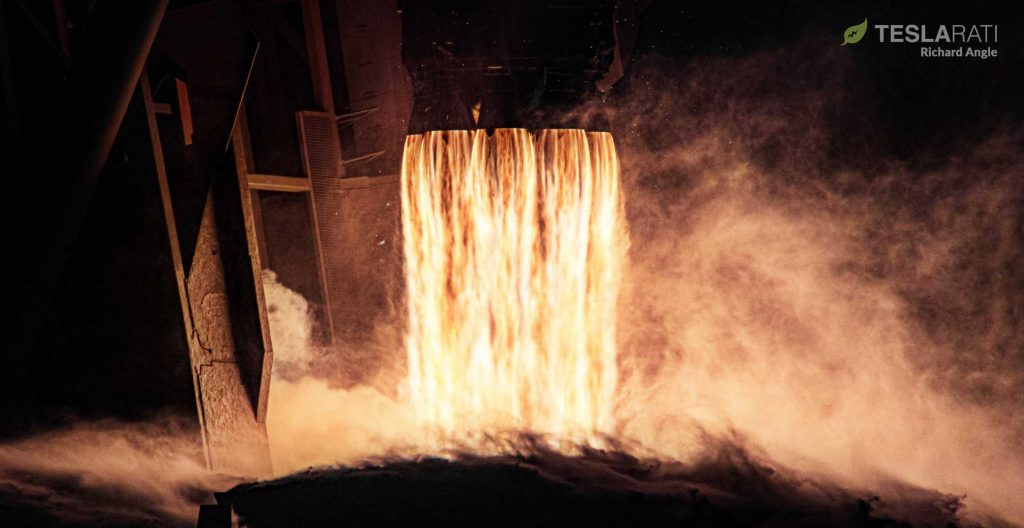 Falcon 9 B1049 lifted off for the fourth time with a batch of 60 Starlink satellites on January 7th. (Richard Angle) For darker spacecraft, perhaps the most important test will be long-term reliability, as constantly absorbing more heat than a reflective satellite will put their structure, avionics, and radiators through significantly more thermal stress. As such, SpaceX may launch a limited number of additional darkened prototypes over the coming months but is much less likely to darken all satellites on any given launch until DARKSATs have successfully operated in orbit for months or even years. On the ground, SpaceX may try to perform sped-up stress testing, but proving that darker satellites are a viable solution will almost invariably take time. Recently, CEO Elon Musk revealed that SpaceX may attempt to design deployable solar shades for Starlink satellites if simply darkening their bodies is not enough to fully mitigate major impacts to astronomy. Knowing SpaceX, the first tests of those solar shades could happen during any of several upcoming Starlink launches. My best close-up image of a Starlink-2 satellite, this frame from an imaging session on March 24 shows clearly the (flat) satellite bus and solar panel. Info: https://t.co/TNuqJr2JHk @SpaceX @SpaceXStarlink @elonmusk @planet4589 @Marco_Langbroek @SPACEdotcom @geekwire @Teslarati pic.twitter.com/DV9TsJMAqG— Ralf Vandebergh (@ralfvandebergh) March 26, 2020

While all satellites struggle with thermal management and typically rely on mirror-like foil insulation and shiny surfaces to stay cool, Starlink’s uniquely flat and rectangular design makes it exceptionally reflective. (Teslarati – SpaceX) Adding reliable, deployable solar shades without appreciably raising Starlink’s production costs could be a major challenge, given the fundamental complexity of large, deployable mechanisms in space, but SpaceX – if anyone – is likely up to the challenge. More importantly, the fact that SpaceX’s very first attempt at reducing Starlink albedo (reflectivity) has produced a satellite 55% darker than its peers suggests that much more can probably be done along those lines, given additional time for extra experiments and deeper optimization. As a result, it may be the case that SpaceX ends up launching 750-1000+ reflective Starlink satellites before an affordable, mass-producible DARKSAT variant is ready to take over. In that event, Starlink may well have a small to moderate negative impact on ground-based astronomy for a few years. However, comments made by Musk over the years suggest that no single Starlink satellite is likely to operate for more than five years before being replaced, meaning that the entire constellation will be in a state of continuous change and improvement. Even if a thousand bright(er) Starlink satellites make life a bit harder for some astronomers, the fact remains that those consequences – assuming SpaceX is serious about fully mitigating Starlink’s impact – are decidedly temporary.

An animation of SpaceX’s Starlink satellite constellation. (SpaceX – gif by Teslarati) If SpaceX continues to make progress darkening satellites and developing cheap solar shades, it seems all but guaranteed that even a constellation of tens of thousands of Starlink satellites will be able happily coexist with the astronomy community, all the while delivering cheap, fast internet to millions of people – especially those lacking access – around the world. The post SpaceX "DARKSAT" results: can Starlink and astronomy happily coexist? appeared first on TESLARATI.