The Tesla and the Porsche: How much does EV driveability matter?

The Tesla and the Porsche: How much does EV driveability matter?

Welcome to a FREE preview of our weekly exclusive! Each week our team goes ‘Beyond the News’ and handcrafts a special edition that includes our thoughts on the biggest stories, why it matters, and how it could impact the future. You can receive this newsletter along with all of our other members-exclusive newsletters, become a premium member for just $3/month. Your support goes a long way for us behind the scenes! Thank you. — After reading some of the Porsche Taycan reviews that came out yesterday, I suddenly recalled a “conversation” I’d had with someone on Twitter a few years back about self-driving technology. Now, this was a bit before the site became quite the current-day cesspool, and I wasn’t yet accustomed to strangers yelling at me when they disagreed with something I’d said, so it stood out at the time. If memory serves me well, I’d tweet-commented some sarcasm about how dangerous driving was to begin with in response to Autopilot criticism making the rounds, and this person replied with ALL CAPS about how the whole thing was wrong-headed because lots of people actually enjoy driving. Specifically, they said that enjoyment was part of what makes us human, and it was even hashtagged. #whatmakesushuman I politely replied that I’d been in too many accidents as a passenger and victim to not welcome the advent of self-driving with open arms. What does the new Taycan have to do with this, you ask? I promise to connect the dots, but bear with me a bit longer… After that little flashback, I had another thought related to some personal plans of mine. One of the pieces of land my husband and I considered building our future home on had dozens of acres, so we dreamt for a moment about having a hobby garage for EV conversion projects with small test tracks and the like alongside chickens and tomatoes. Shortly after, though, it really became clear to me that the future of auto wasn’t just electric. Its drivers will have motherboards instead of flesh and blood. I still don’t really know what to think about all that. I mean, I love microcontrollers and have a collection of stuff I’d like to solder together and write scripts for, but tinkering with neural networks is a few more calculus classes away for me to even meet the pre-reqs of learning anything useful to implement in a hobby garage. (And so forth.) Of course, my husband is all for anything that involves cars, even just legacy ICE models, but my interest was directly tied to Elon Musk & Company, and they’re pretty set on self-driving. I just couldn’t see myself retrofitting a 1959 Cadillac Eldorado with Tesla-type tech for an AI-powered vintage chauffeur. I suppose an electric tractor might be a worthy endeavor, but I digress. Musk has said a few times now that buying anything other than a Tesla is like buying a horse and buggy, not because of their 0-60 mph times, Track Mode, or amazing safety ratings. Other brands are behind because of Tesla’s Full Self-Driving progress. So, let’s circle this discussion back around to the Taycan. 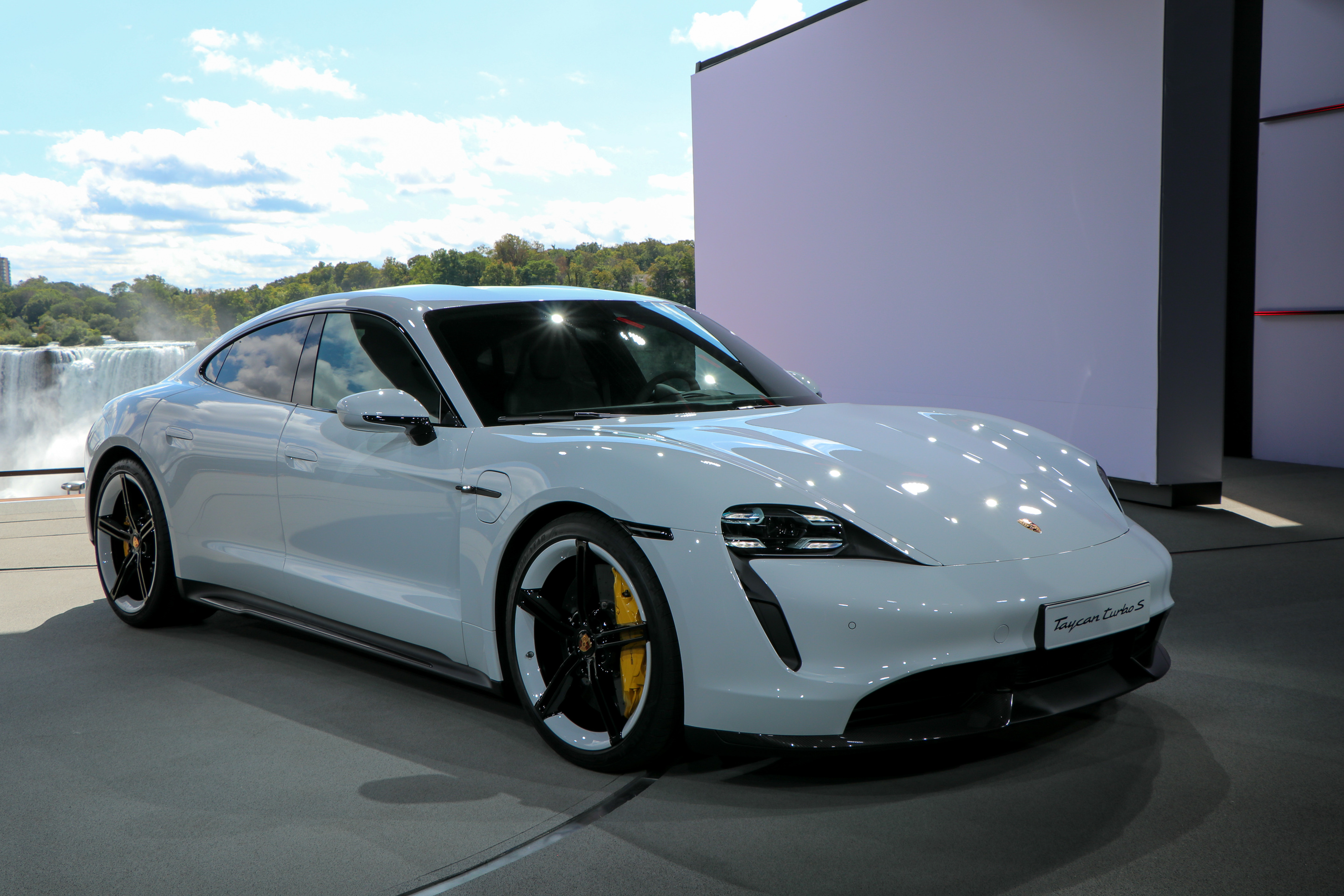 September 4, 2019: World Premiere of all-electric Porsche Taycan with Niagra Falls as the backdrop (Photo: Sean Mitchell/Teslarati) (adsbygoogle = window.adsbygoogle || []).push({}); Over at The Drive, Alex Roy had some harsh words for anyone comparing Porsche’s new EV to anything Tesla: If you’re comparing the brands, you’ve missed the point. The Taycan isn’t about winning a drag race or waving around one’s testosterone (or heightened estrogen) from stoplight to stoplight. It’s about driving. Period. “The specs almost don’t matter. It’s designed to be driven,” Roy argues. “The Taycan is for people who want to drive, and continue doing so. That’s why Porsche exists as a company. If you don’t understand that, no Porsche ever made was made for you, and the company might as well not exist.” The Taycan’s lack of a Tesla-style Autopilot is almost a feature, he essentially says. The car driving you would take away from your experience driving the car. My Twitter troll wasn’t as elegant as Roy in making a similar point, but I suppose not every messenger has a talent for communication. These dueling concepts have left me a bit…distraught(?)…about where to put my enthusiasm. Do I root for better EV designs or better self-driving software? Will the car matter in the end when your attention is either on the scenery or on cabin entertainment? Personally, I like newer-looking taxis, but I can’t say I’ve ever hailed one with any thought about its particular make and model. I imagine my personal self-driving vehicle purchasing decision would be similarly practical. In such a world, some basics like comfort and a smooth ride will be valued, but the experience will no longer factor in the driver or driver-initiated capabilities. This probably seems like a silly thing to get caught up in when Level 4 and 5 autonomy still feel like eons away, but I’m also the kind of person that gets bummed about rockets being “old” and “inefficient” for long-distance space travel. Where’s my warp drive already?? (I will note that I don’t like Star Trek episodes with too much plot over tech showcases. I’m also told I’m great fun at parties. Not sure if the two are related.) So, while the Porsche Taycan looks like it’s going to make Porsche-type people happy, is it just the latest display of legacy auto still not “getting” where EVs are headed? Or, perhaps there will always be a “manual” lane on highways and some streets in the future for those wanting to live dangerously? This issue might not mean much for decades to come yet, but when my grandkids are looking for something to ferry me to doctor appointments, I can honestly tell them I’ve been thinking about what I want for a very long time. Perhaps I may even have made up my mind by then. The post The Tesla and the Porsche: How much does EV driveability matter? appeared first on TESLARATI.