In May 2019, Blue Origin unveiled plans to build and launch “Blue Moon” lunar landers. Five months later, founder Jeff Bezos has announced a proposal for NASA’s Artemis Moon lander program that would augment Blue Moon with hardware from aerospace stalwarts Lockheed Martin, Northrop Grumman, and Draper to land astronauts on the Moon in the 2020s. On top of that, Bezos also revealed the first unequivocal confirmation that Blue Origin has begun building full-scale prototype hardware for its ambitious New Glenn orbital launch vehicle – in this case, half of a massive carbon fiber payload fairing. National priority…National team. Time to go back to the Moon – to stay. @LockheedMartin @northropgrumman @DraperLab https://t.co/S8UF3u2OZV pic.twitter.com/swfqF45vRn— Blue Origin (@blueorigin) October 22, 2019 (adsbygoogle = window.adsbygoogle || []).push({}); In a press release posted to the company’s website, Blue Origin’s Chief Executive Officer, Bob Smith, stated that “national challenges call for a national response. We are humbled and inspired to lead this deeply committed team that will land NASA astronauts on the Moon.” The national team will be managed with Blue Origin as the principal contractor and “[combine] our partners’ heritage with our advance work on the Blue Moon lunar lander and its BE-7 engine.” Solving the lunar landing equation Each company was selected based on a demonstrated area of expertise that solves a very specific piece of the equation that is landing astronauts on the moon. Blue Origin will serve as the primary contractor leading mission engineering and assurance, as well as providing the lunar Descent Element, Blue Moon. Lockheed Martin will provide the reusable Ascent Element vehicle and lead the operations and flight training of the crew, while Northrop Grumman provides the Transfer Element vehicle to deliver Blue Moon to the lunar surface. Draper’s contribution is integral to mission success. It will provide a navigation system “designed to give crewed missions precise location and navigation data needed for safe and accurate lunar and planetary landings” as outlined in a NASA Space Technology Mission Directorate statement earlier this month. The Draper navigation system is expected to debut during a launch of Blue Origin’s suborbital rocket, New Shepard as proof of concept by year’s end. 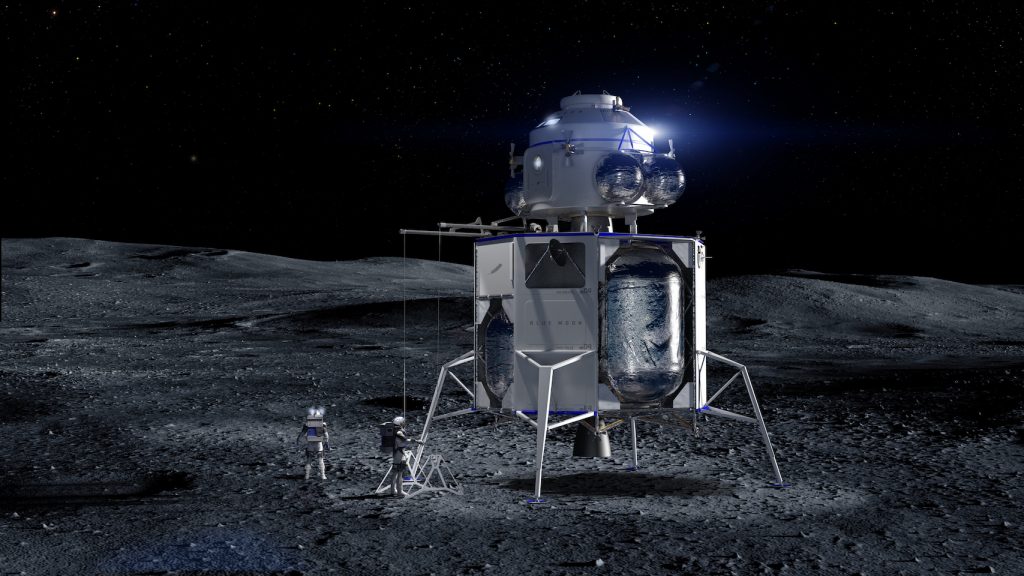 The Blue Origin Cape Canaveral factory where the massive New Glenn rocket is being constructed and an artist rendering of Launch Complex 36 where it will launch from. (Blue Origin) Blue Origin is notoriously hesitant to share much of anything about its next-generation New Glenn rocket, so it’s a pleasant surprise to receive even the briefest of glimpses behind the scenes. Combined with Blue’s undeniable rocket propulsion expertise and shrewdly political (albeit unsavory) approach to industry collaboration, the company is clearly here to stay and is certainly doing everything it can to give NASA an offer it simply can’t refuse. Check out Teslarati’s newsletters for prompt updates, on-the-ground perspectives, and unique glimpses of SpaceX’s rocket launch and recovery processes. The post Blue Origin teases first New Glenn rocket prototype at Blue Moon lander event appeared first on TESLARATI.