A recent study from a Compare the Market, a UK-based price comparison company, has determined that the Tesla Model 3 is currently the world’s most searched-for all-electric vehicle in the world. Following behind the Model 3 was longtime EV veteran Nissan Leaf, as well as Tesla’s two other cars, the Model S and the Model X.  The UK-based firm’s study utilized Google search data to determine the most popular search term for each electric vehicle on the market and compare each car’s popularity across the globe. The survey’s figures are exclusive only to searches of battery-electric cars, as hybrids, plug-in hybrids, and hydrogen vehicles like the Toyota Mirai were not included in the survey.  According to Compare the Market’s results, the Tesla Model 3 is the overwhelming winner worldwide, being the most-searched-for EV in 54.7% of search traffic surveyed. That accounts for more than half of the 136 countries covered in the study. It should be noted that the gap between the Model 3 and the study’s second placer, the Nissan Leaf, was notable as well, with the Japanese-made EV leading in 16.1%, or 22 countries across the globe. 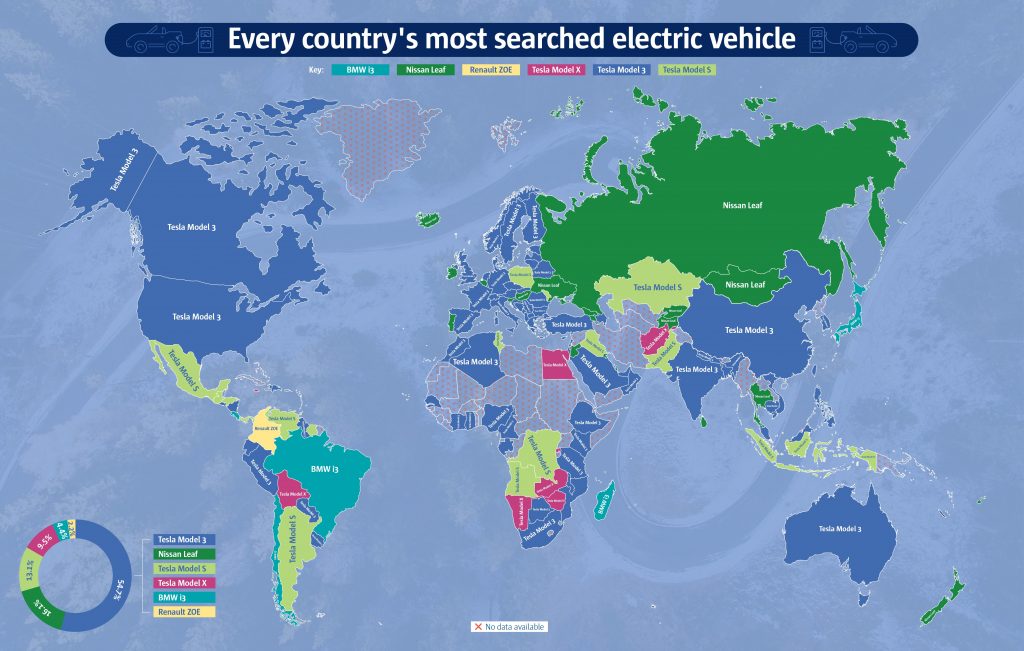 The world’s most popular electric cars per region. (Credit: Compare the Market) (adsbygoogle = window.adsbygoogle || []).push({}); The Tesla Model S and Model X were the study’s 3rd and 4th placers, leading the rankings in 13.1% and 9.5%, taking of the search traffic surveyed. Overall, Tesla’s electric car lineup dominates internet searches for all-electric vehicles in 77.3% of the countries surveyed by the UK-based firm.  Apart from the Nissan Leaf, other non-Tesla vehicles that proved popular in Google searches were the BMW i3 (4.4%), and the Renault Zoe (2.2%). Other premium EVs such as the Jaguar I-PACE, the Audi e-tron, and the Mercedes EQC did not rank in the survey.  The study’s results become quite interesting when they are broken down by country. The Model 3 held a clean lead in a number of the world’s key auto markets, such as the United States, China, most of Europe, and even India, a country that is yet to see its first Tesla store. The Nissan Leaf dominated in Russia, while the Tesla Model S received the most search traffic from Mexico and Argentina. The BMW i3 even proved particularly popular in Brazil.  Interestingly, the study shows that the rankings didn’t necessarily align with the national origins of a particular vehicle. In Japan, for example, it was the BMW i3, a German car, that dominated internet searches. Germany, the home of the BMW i3, displayed strong interest for an American all-electric car, the Tesla Model 3.  Considering the hype and the close news coverage that follows Tesla’s electric car lineup, it is rather unsurprising to see the Model 3 dominating in the UK-based firm’s study. What is particularly notable was that even with the Model 3 taking most of the spotlight, Tesla’s Model S and Model X, which have already been in the market for years, ranked highly in the survey nonetheless. This shows that Tesla has become a brand that is perceived as a premier maker of EVs across the globe, even in areas where it is yet to begin selling its vehicles.  Part of Tesla’s secret sauce for its vehicles’ popularity lies in the company’s strong online presence, which it grows through organic engagement in social media. This was highlighted by a study from competitive intelligence analysis firm BrandTotal, which noted that Tesla, despite investing $0 in paid advertising on social media platforms, is the car company with the strongest social media presence. “Strong brands are able to command high engagement even without a robust digital ad spend. In Tesla’s case, we see their engagement numbers are high compared to other auto brands allocating spend in their digital campaigns,” Alon Leibovich, co-founder & CEO of BrandTotal, said. The post Tesla Model 3 tops survey for the world’s most searched-for electric car appeared first on TESLARATI.