SpaceX reportedly plans to build a massive mobile gantry – effectively a tower on wheels – at one of its two Florida launch pads, a bid to meet obscure military launch criteria needed to secure highly lucrative Falcon 9 and Falcon Heavy launch contracts from the US government. Although this is not the first time that SpaceX and vertical integration have been thrown around in the same sentence, it is the first time that the company is reportedly close to actually finalizing its plans along those lines and constructing a real solution at one or more of its three orbital-class launch pads. Throughout the entirety of its active launch operations, SpaceX has relied exclusively on horizontal integration for its Falcon 1, 9, and Heavy rockets and the satellites they launch. CEO Elon Musk and other executives have maintained a consistent rationale for that preference over the years: ensuring that rockets and payloads can be horizontally integrated is the best possible solution so long as SpaceX’s primary motivation is improving access to space and lowering the cost of launch. As such, SpaceX has one and only one major motivation to jerry-rig a vertical integration solution for its Falcon family of rockets: necessity by way of arcane US military launch contract requirements. SpaceX has drawn up plans for a vertical rocket enclosure some 30 stories tall at launch pad 39A at NASA’s Kennedy Space Center in Florida. The gantry will allow US spy satellites to be vertically mounted atop Falcon 9 & Falcon Heavy rockets. FULL STORY: https://t.co/amsPQGlyWr pic.twitter.com/eWUs7xJAiJ— Spaceflight Now (@SpaceflightNow) January 4, 2020 (adsbygoogle = window.adsbygoogle || []).push({}); Spaceflight Now broke the latest news first on January 3rd, 2020, revealing that SpaceX was at long last taking a substantial step towards actually building its own vertical integration infrastructure at Kennedy Space Center (KSC) Launch Complex 39A – a step that was long anticipated but has taken years to transpire into anything concrete. The gist is this: for a variety of seemingly shoehorned and far-from-obvious reasons, the secretive, ultra-expensive spy satellites that contractors like Lockheed Martin and Boeing build for the US Air Force (USAF) and the National Reconnaissance Office (NRO) builds itself are designed in such a way that they apparently cannot be flipped horizontally in a rocket’s payload fairing. 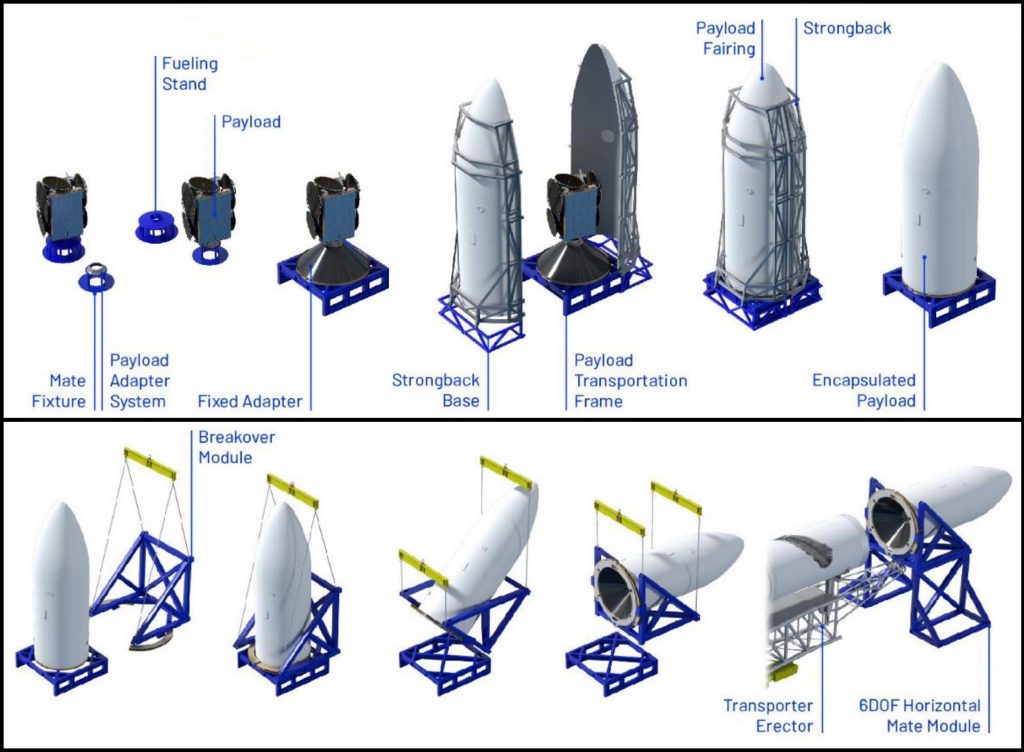 Although taken from Blue Origin’s New Glenn payload user’s guide, SpaceX’s process of encapsulating satellites in Falcon payload fairings is functionally identical. (Blue Origin) Identical to the process depicted above for Blue Origin’s in-development New Glenn rocket, up to now, SpaceX has encapsulated all satellite payloads vertically, sealed the payload fairing, rotated that integrated fairing and payload, and then attached that assembly to horizontal Falcon 9 and Falcon Heavy rockets. The rocket is then transported to the launch pad on a transporter erector (T/E), which – as the name suggests – raises the rocket and payload vertical before propellant loading and launch. For certain USAF and NRO launch contracts, breakover (horizontal flip) is unacceptable and their preference is that the launch vehicle be brought vertical before the payload – also still vertical – is stacked on top. While it sounds simple in principle (i.e. “Just stick a crane out by the pad!”), vertical payload integration is exceptionally tedious unless you already have the infrastructure in place. Competitor United Launch Alliance (ULA), for example, already has that infrastructure – having held a decade-long monopoly over US military launches that only ended 5-7 years ago, depending on how it’s measured. Both ULA’s Atlas V, Delta IV, and soon-to-be Vulcan Centaur rockets and the infrastructure used to launch them have all been designed around vertical payload integration – essentially requiring massive, expensive, and complicated buildings-on-wheels at each launch facility. 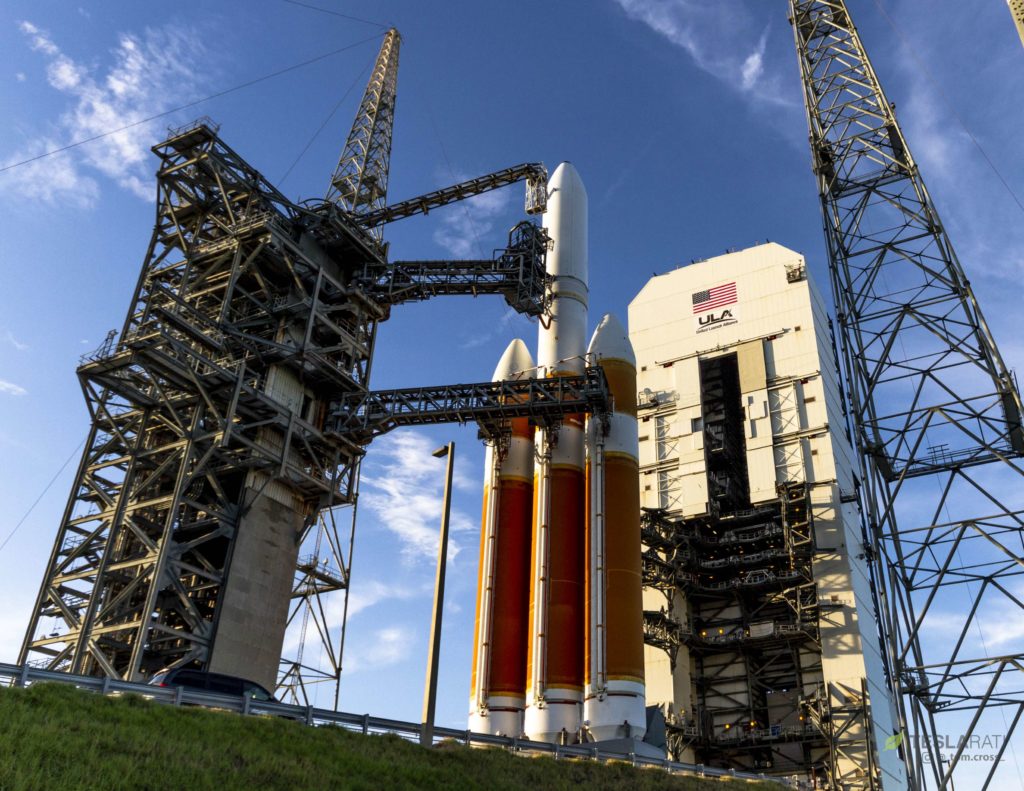 (Tom Cross)
https://www.youtube.com/embed/-Zq2SufDA ... ure=oembed
In effect, SpaceX must partially copy competitor United Launch Alliance (ULA) by building its own massive service tower to evenly compete with the company on the latest lucrative US Air Force launch contract. Per Spaceflight Now, SpaceX has plans to build a similar mobile tower at Pad 39A, currently dedicated Falcon 9/Crew Dragon missions for NASA and the occasional Falcon Heavy launch. That tower will ultimately roll up to Falcon 9 or Heavy rockets on the pad, fully covering the vehicles and giving technicians an array of work platforms and tools to support vertical payload integration, among other uses. SFN says that the mobile tower will be even taller than the existing Fixed Service Structure (FSS) tower at Pad 39A, measuring some 30 stories (100m/330ft) tall. In line with a recent FSS redesign that saw that existing tower modified for Crew Dragon and outfitted with semi-transparent black glass or plastic and a black-and-white color scheme, the new mobile tower will apparently be built with a similar design language. 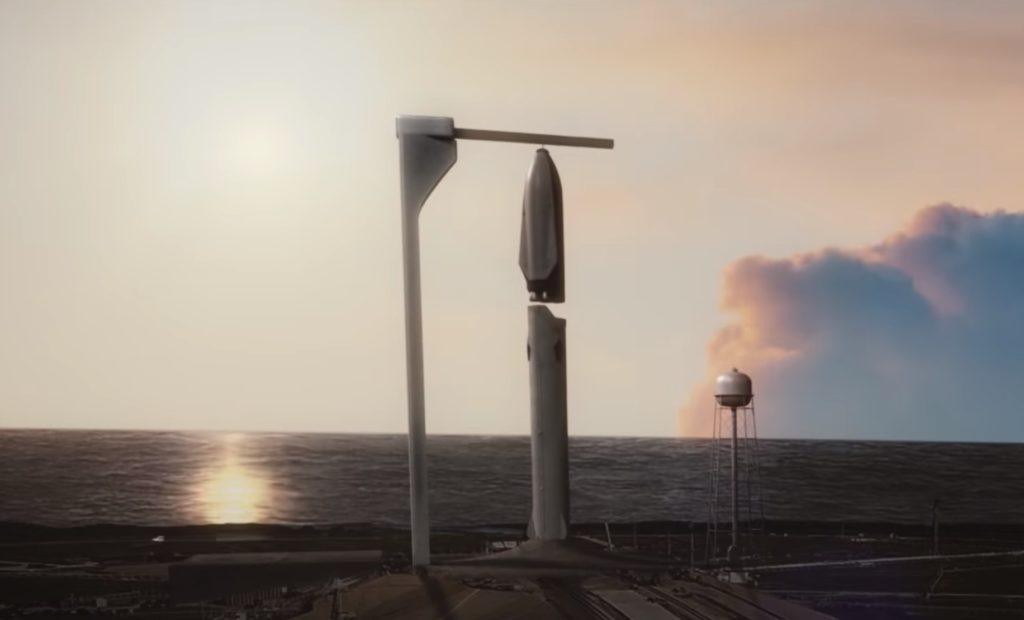 While now outdated, SpaceX’s 2016 Mars rocket featured a giant crane used for vertical integration. BFR appears to use the same approach. (SpaceX) Ultimately, all of SpaceX’s plans for Starship – a massive next-generation, fully-reusable rocket – have relied on some form of vertical integration for Super Heavy boosters, Starships, and tankers. In a best-case scenario, all of those vehicles may one day land in reach of a giant crane situated at the launch pad, allowing SpaceX to lift them back to the pad and install ships and tankers on Super Heavy boosters just hours (maybe even minutes) after touchdown – truly rapid reuse. For now, it’s unclear when exactly SpaceX wants to start cutting metal for its new Falcon 9/Heavy gantry, but it’s safe to say the company will move fast as usual once it begins. Check out Teslarati’s newsletters for prompt updates, on-the-ground perspectives, and unique glimpses of SpaceX’s rocket launch and recovery processes. The post SpaceX's Falcon rockets might need a giant tower on wheels for US military launches appeared first on TESLARATI.