Since the Tesla Model 3 began initial deliveries in Summer 2017, figures show that the United States’ ten most popular petrol-powered luxury sedans have seen a decline in popularity. All ten of the sedans have experienced a drop in sales when comparing numbers from 2017 and 2019. The sales figures for the Model 3 have shown a striking increase over the past two years since its release. But a report from wheelsjoint.com shows other automakers haven’t had the success Tesla has experienced. The downswing in these vehicles can all be attributed to the beginning of Tesla’s mass production of the Model 3 in 2018. Tesla’s most affordable sedan has clearly caused a change in what appeals to the average consumer who is looking to purchase a luxury vehicle. 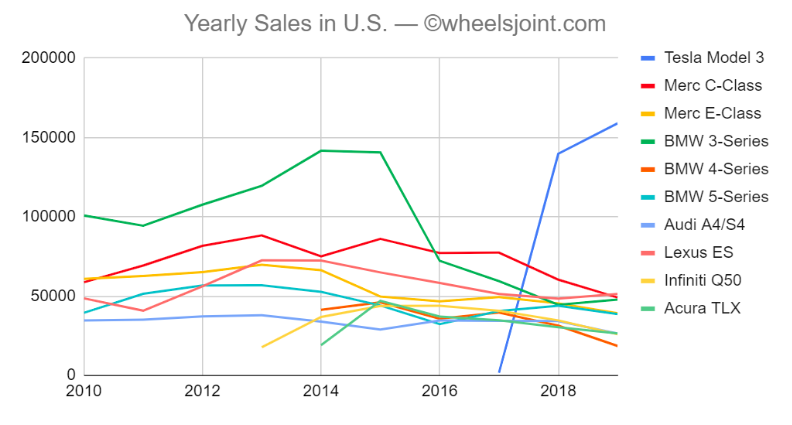 Credit: wheelsjoint.com (adsbygoogle = window.adsbygoogle || []).push({}); Tesla reported that it delivered 145,846 Model 3s in 2018 after its mass production phase for the vehicle began. But 2019 would prove to be the biggest year for Tesla yet. They delivered 92,550 Model 3s in 2019 Q4 alone or 63% of what they delivered in the previous year as a whole. Increased Model 3 deliveries in 2019 only caused a sharper dip in sales for the group of internal combustion engine luxury vehicles. The popularity of the Model 3 has effected all of the vehicles negatively, but no car felt the effects more than the BMW 4-Series. The 4-Series has seen a 53% drop in sales figures from 2017 to 2019. The car’s numerous variants were sold 39,634 times in 2017, but that number dropped to below 19,000 units in 2019. The 4-Series was first offered to the public in 2013 and was one of BMW’s best selling lines. However, sales of sharply dropped off and BMW is planning to release a new “2nd Gen” body style of the 4-series to hopefully revive its popularity. The Mercedes-Benz C-Class also has watched its numbers crumble as a result of the Model 3. The C-Class is a car that has shown steady growth since its first model was released in 1993. While the car is the most popular on the list as Mercedes-Benz sold 77,446 C-Class units in 2017, it experienced the second sharpest drop on the list at 36%. It managed to only sell 40,739 units in 2019. The Model 3’s popularity and appeal comes from a variety of things, it just depends on who you ask. Some may have decided to go electric because of the gas savings, the EV incentives, the environmental impact, or the proven performance of Tesla vehicles. One thing is for certain, the company is steadily making an impact on the automotive market. As the Model 3 quickly becomes one of the most popular cars in the world, the next question is: Will Tesla’s other cars begin to disrupt their respective sectors as well? The post Tesla Model 3 wreaks havoc on Mercedes-Benz and BMW in luxury sedan segment appeared first on TESLARATI.