Elon Musk’s Boring Company has made plenty of progress with its Las Vegas Convention Center people mover. The underground tunnel is now about 50% complete and around six football fields in length, according to the Las Vegas Convention and Visitors Authority. The Boring Company officially started tunneling for the people mover after a ceremonial groundbreaking event on November 15. In just two months, the project is nearly halfway completed. The company’s Tunnel Boring Machine (TBM) has been 40 feet underground for months and is working to drill two, one-mile-long tunnels. Boring Company began shipping portions of the TBM to the site in Las Vegas in September. Since then, the project has really started to take shape. 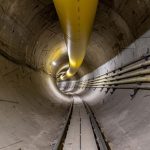 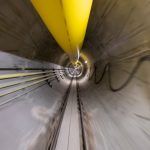 (adsbygoogle = window.adsbygoogle || []).push({}); Musk’s dream of solving the common everyday riddle of traffic birthed the idea of the underground tunnel. The Boring Company has already completed a private tunnel for Tesla vehicles in Los Angeles. But the Las Vegas tunnel will be the first publicly available transportation system that the Boring Company will complete. The project cost the Boring Company $52.5 million and is expected to connect the Las Vegas Convention Center to popular Las Vegas hot spots. Downtown Las Vegas, the Strip, and McCarran International Airport will all be destination options for riders. The mover is expected to transport an estimated 4,400 people per hour. The Las Vegas project is just one of five projects the Boring Company has listed on its website. Boring Co. locked up the deal with the LVCVA after blowback from some members of the board who felt the company did not have enough background to trust with a large project like this. LVCVA board member Michele Fiore was one of the most vocal and she opposed the Boring Company’s involvement in the project from its initial stages. “They already have projects here that are operating successfully. The Boring Co. is three years old and has yet to deliver a final package on anything,” she wrote. Fiore was more interested in an above-ground project that would be completed by an Austria-based company known as Doppelmayr Garaventa Group who has a rich, 125-year history. The Boring Company’s progress on the project is sure to have the doubting board members of the LVCVA thinking twice. The project is due to be finished in January 2021 and will be unveiled at the Consumer Electronics Show in Las Vegas. A Livestream of the Boring Company’s Las Vegas Tunnel Project is available for viewing here. The post The Boring Company’s Las Vegas tunnel is nearly 50% done appeared first on TESLARATI.